Like most of the artists we’ve interviewed in the past, illustrator Yulong Lli’s love for visual arts can be traced right back to his childhood. In his case, specifically to picture books which his parents left him with when they had to work. His passion eventually drew him to the China Academy of Art in Shanghai, where he is currently based.

Although still a student, Yulong has already racked up an impressive client list including Uber, Ikea, Airbnb, Starbucks, Google, and GQ, among others. Through an email, he talks to us about some of his personal and commercial works, his love for Shanghai, his dream projects, creative influences and more. Read on: Tell us a little about your childhood. Where did you grow up?

My hometown is a small industrial city in northwestern China. However, I grew up without having seen flocks of sheep or horses run around the grasslands in my area, unlike what was being advertised in all these TV shows. My parents always dragged me to their work because they couldn’t leave me alone at home. I would be given a picture book that somehow managed to sustain my attention for hours at end and keep me quiet. I think that’s probably when I started developing a passion for art.

Have you always wanted to be an illustrator? How did you come to realize your passion for the creative arts?

I never really thought about being an illustrator before GaoKao (The National College Entrance Examination held annually in People’s Republic of China). Nobody even believed art to be something serious or worth majoring in, including my parents. It’s extremely hard to get into a famous art school in China. They probably thought I couldn’t get in and would end up going to a below-average art college where I’d study something useless and end up unemployed after graduation.

As a freshman in the university, I was still confused about my interests but getting to study in Shanghai gave me access to a whole new world of art. I feel lucky to have had the chance to experience everything Shanghai had to offer as the art center of China. I visited a lot of art exhibitions and did internships in different fields in my spare time. I finally realized that illustration is my biggest passion. 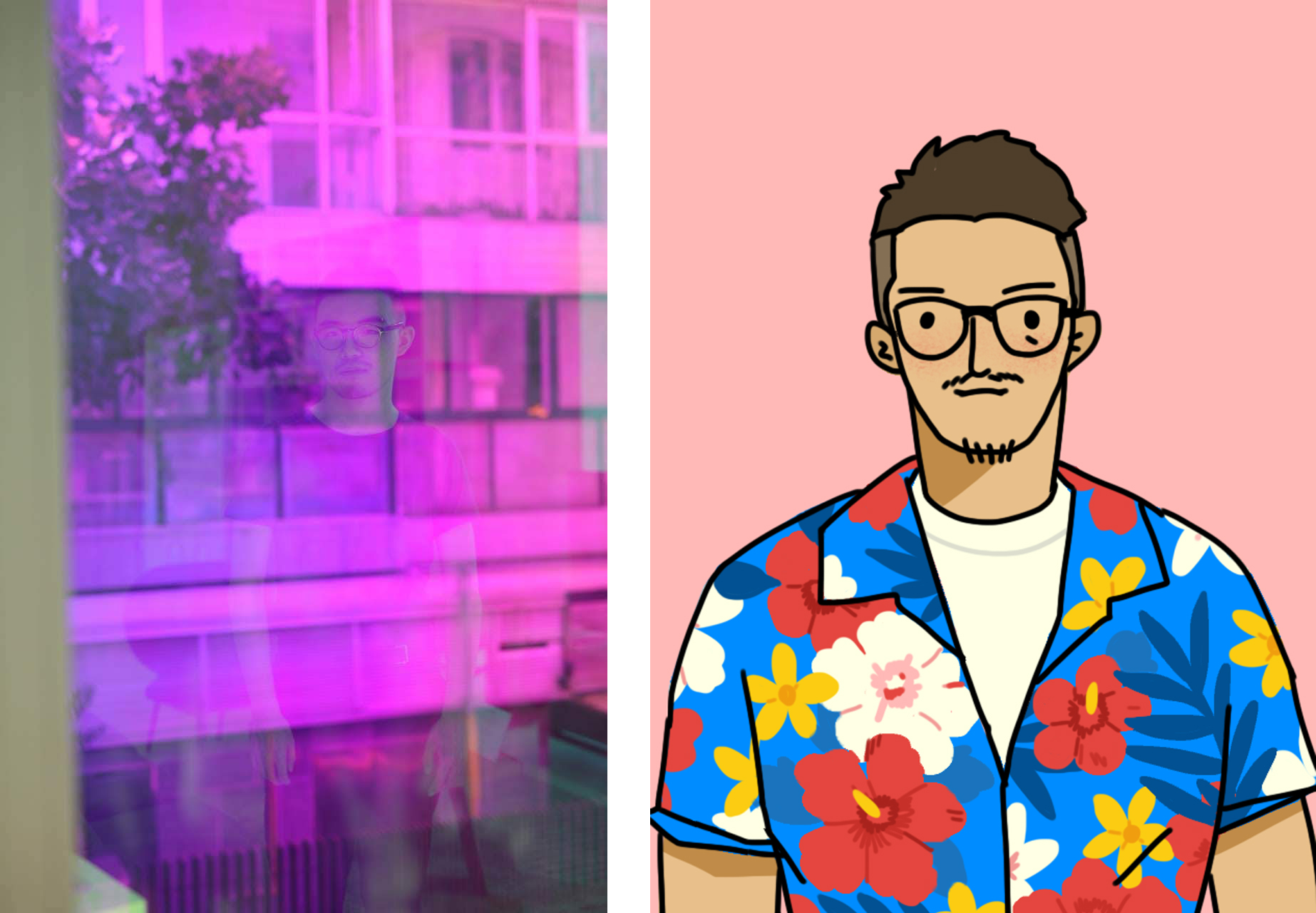 What is your main area of study at China Academy of Art? Has pursuing art academically changed your perception of it in any way?

I’m studying creative production design at the China Academy of Art. It makes me deal with illustration in a much broader perspective so I don’t have a one-dimensional or isolated view of the practice. It helps me realize that illustration is not just some kind of tool for visualization, but a lamp that sheds light on something we wouldn’t have seen otherwise.

How would you describe your overall visual style?

Honestly, I think there is a wide range of new styles and techniques in the future that are just waiting to be tried so I don’t really want to define my style right away. What I can be sure of, however, is that my current illustration style reflects the things I’m into right now, basically things that are made with love and candy.

While you’ve made illustrations covering a wide range of topics, each of them still carries your distinctive style. So how do you manage to experiment with your signature aesthetic while still trying to maintain it?

An illustrator’s personal style is hard to put into words. So when clients choose me, I make sure they are aware of my previous works and fully accept my signature aesthetic. Especially in the case of commercial projects, because the clients always want you to help them solve more than one issue through your illustration. 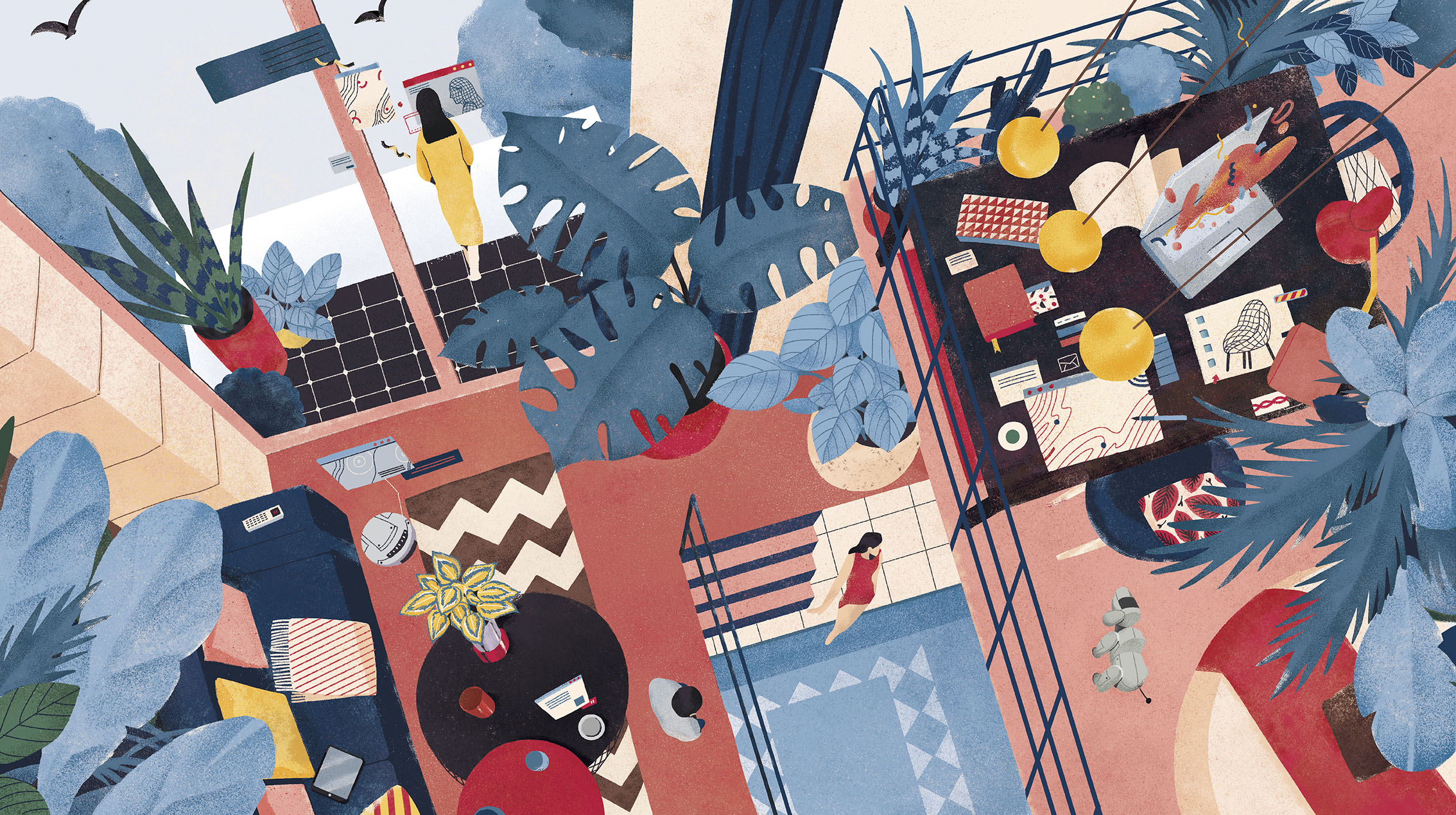 Dream of An Ideal Home

In your illustration for Airbnb, ‘Discover Shanghai’, you’ve mentioned how every city has a unique personality. How has Shanghai’s influenced you and your work?

I really love Shanghai. I want to shout it out three times! No other city in all of China has so many extraordinary art exhibitions and galleries. Shanghai also has a very special history as a “leased territory”, which was once occupied by some European countries like France. It lends the city an eclectic architecture which is a combination of Chinese and Western elements. You can see the influence even in the local foods and the lifestyles of its residents.

Through ‘Discover Shanghai’, I wanted to express my take on the city’s personality by presenting a glimpse of French Concession rather than a landmark. I see the place as a mirror that reflects the way in which its history promoted cultural fusion.

Your personal project ‘Quantified Self’ delves into the complications of independent thought and decision-making in an era led by apps and automation. What prompted you to create something around this particular topic?

I’ve always been surprised by just how accurate Spotify’s data analysis is. I use the music app while jogging or working, and it recommends songs that are very close to my own music taste. This function saves me a lot of time because I always like what I listen to but it also puts me in a cycle. I realized that my choices are limited and are based on the comfort range defined by big data analysis. So I decided to explore this further through a design project.

I wanted to express my concern about how we all make selections based on quantified data that is collected from personal preferences. Eventually, we won’t be able to experience new things at all.

Will this so-called ‘quantified self ’ lead us to a better future?

Tell us about the group project ‘Liquidity Self-identification’. Seeing how this project tackles several aspects of identity politics, how did your illustration and personal experiences fit into the series?

I started an illustration group called himo this year to do some experimental illustration projects. It is well known that sexuality is a very sensitive issue in China. We wanted to talk about the relationship between self-identification and the surrounding environment. I believe that our identities and how we perceive ourselves largely depends and constantly changes with our surrounding atmosphere.

Self-identification is a lot like a precious stone, in that it is multifaceted. It has to fit in with the rest of society and protect us from getting hurt. For us, being gay means having to keep our sexual preferences a secret. We have to put on fake “straight” or “normal” identifications. This precisely reflects some problems in our environment, or rather in our society. 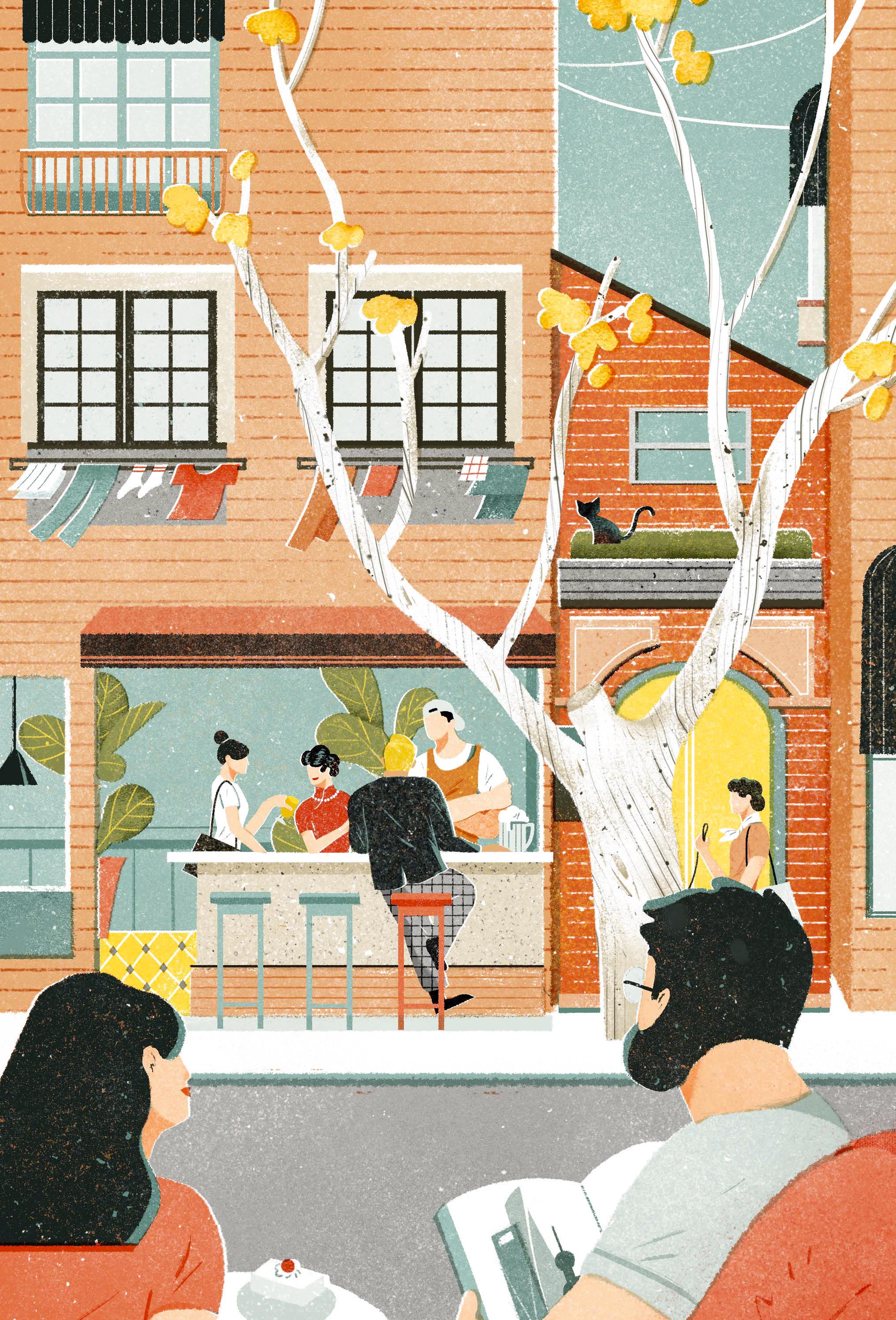 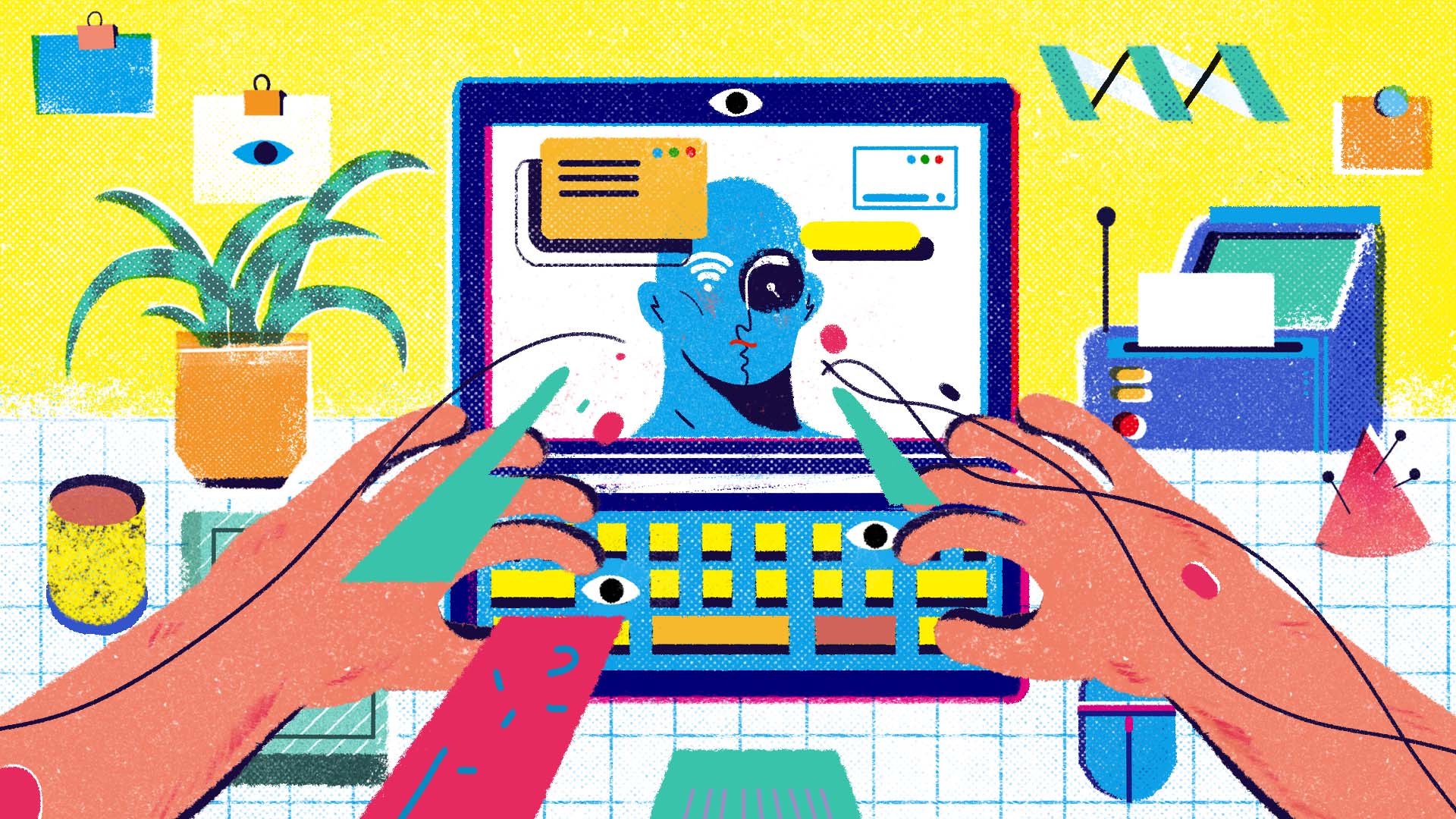 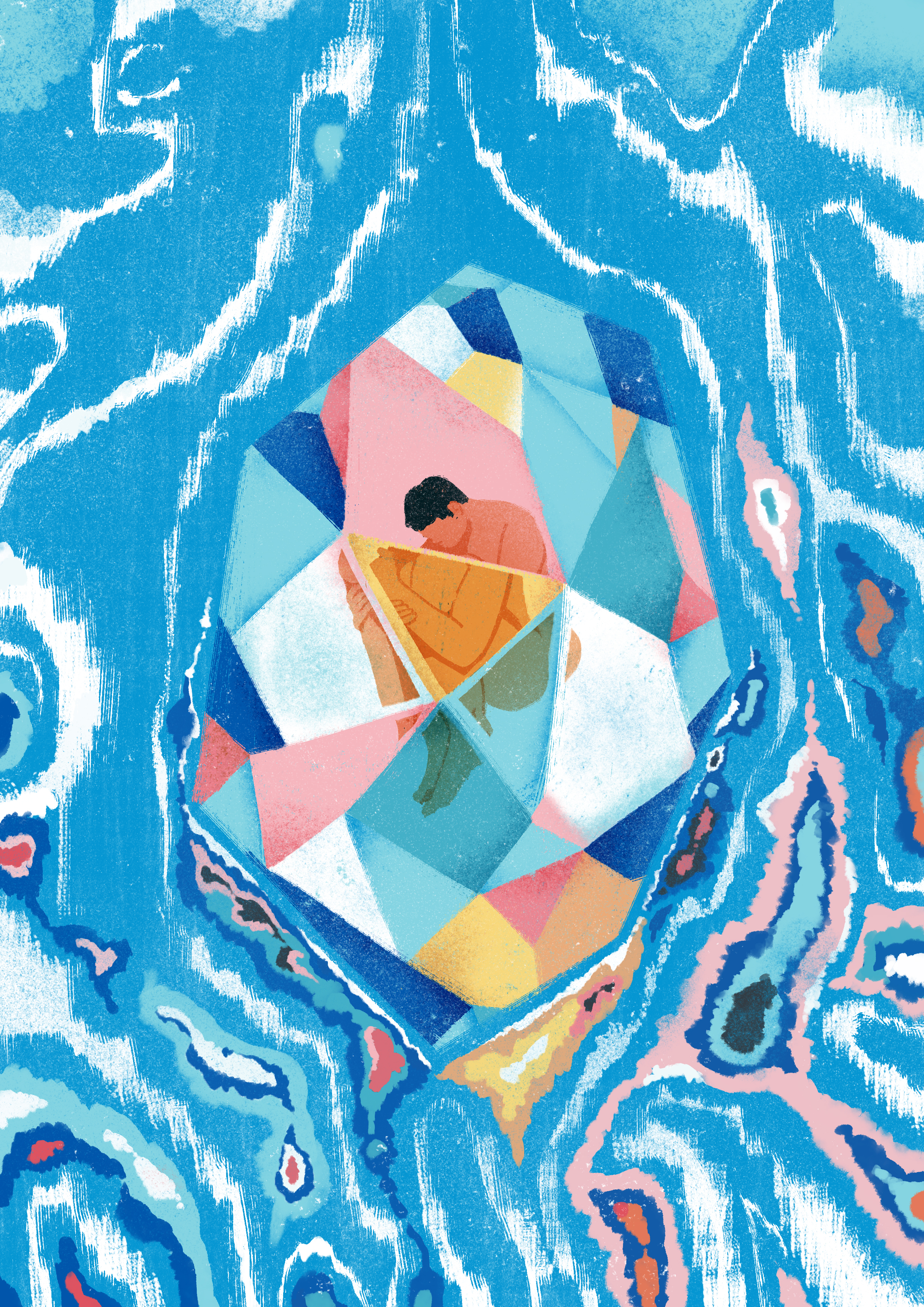 My parents always dragged me to their work because they couldn’t leave me alone at home. I would be given a picture book that somehow managed to sustain my attention for hours at end and keep me quiet. I think that’s probably when I started developing a passion for art.

Can you take us through a day in your life?

My day looks a lot like a typical school day where you have to attend lots of classes and keep two-part time jobs. I’m studying for my Master’s so I have to wake up early and finish my schoolwork first. I try to use my spare time efficiently for other projects. If I don’t have a class in the morning, I end up working until midnight like most other freelancers.

But how do you balance between academics, commercial works and personal projects?

I have to say that’s a very good question because I spend a lot of time struggling to find a balance. Making a timetable obviously helps, but sometimes I have to give up low-value projects or courses in order to save time and energy. From time to time, it really helps to remind ourselves that we are not ‘Superman’ and can’t do everything perfectly.

How do you deal with creative blocks if any?

I try to distract myself from it. Going to the gym or doing some cleaning usually work well for me.

Do you have a dream project of some sort?

Probably illustrating for The New Yorker and Monocle. These two are definitely the most common “dream clients” for illustrators all over the world, including myself. They obviously haven’t approached me yet because I still have a long way to go.

I treasure every opportunity or any project that helps me learn. In its own way, that becomes a dream project. (If you are an art director or editor reading this interview now, please Google my name for more information, you might just be my dream client!)

From the projects you’ve worked on, is there one that left a significant impact on you?

It has to be ‘Discover Shanghai’ for Airbnb. It was my first time formally working with such a big, international client. I couldn’t even believe it when it happened! The project turned me into a more seasoned and professional illustrator.

And it wasn’t just about updating my progress or going back to Shanghai earlier than needed (this was during the Chinese New Year holidays), it was also about learning to deal with payment issues, which was an uncharted territory for me. That project was complicated and stressful because I knew I couldn’t mess it up. And when it was finally completed, I almost felt like I’d changed somehow, from the inside out. 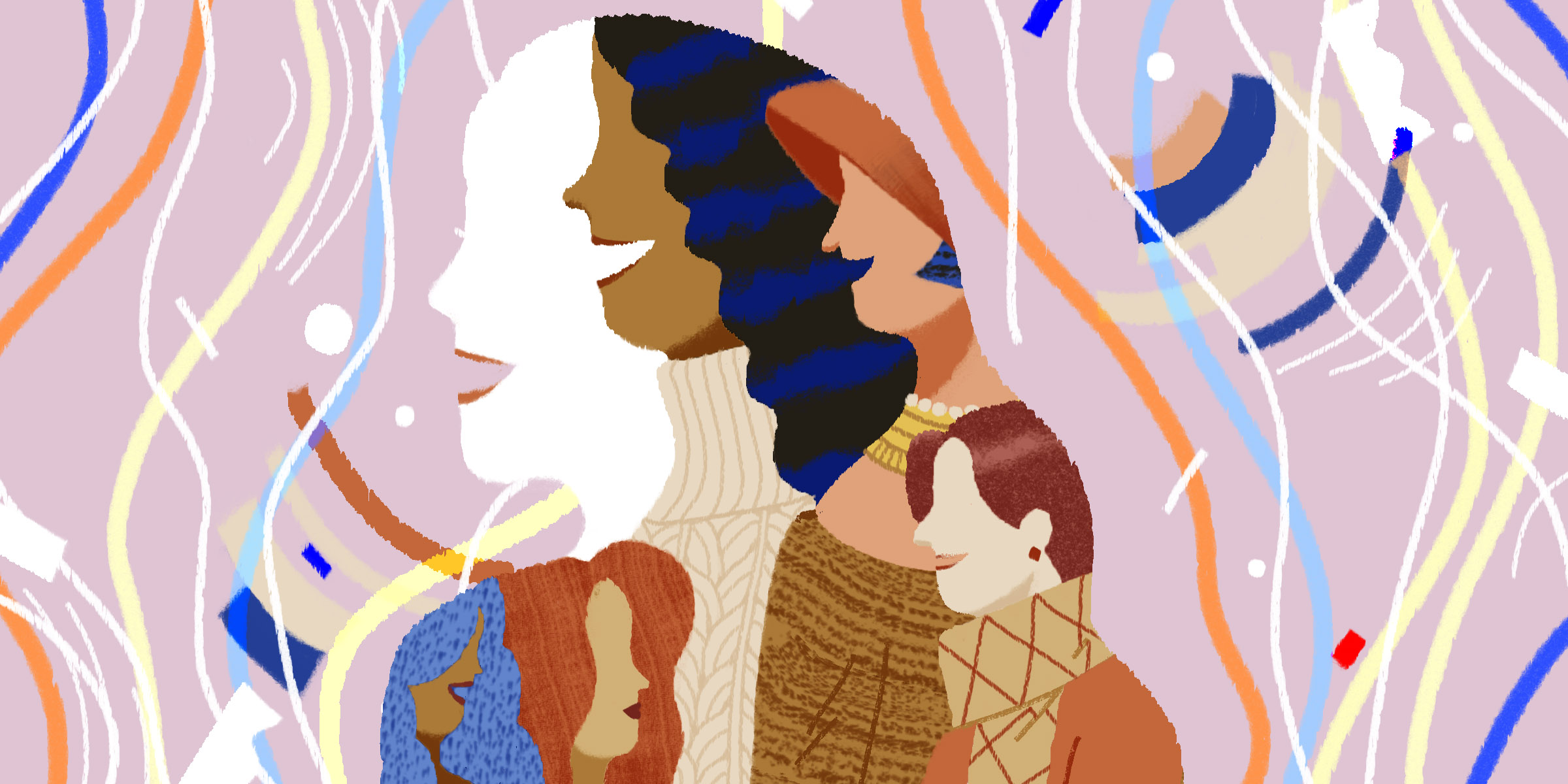 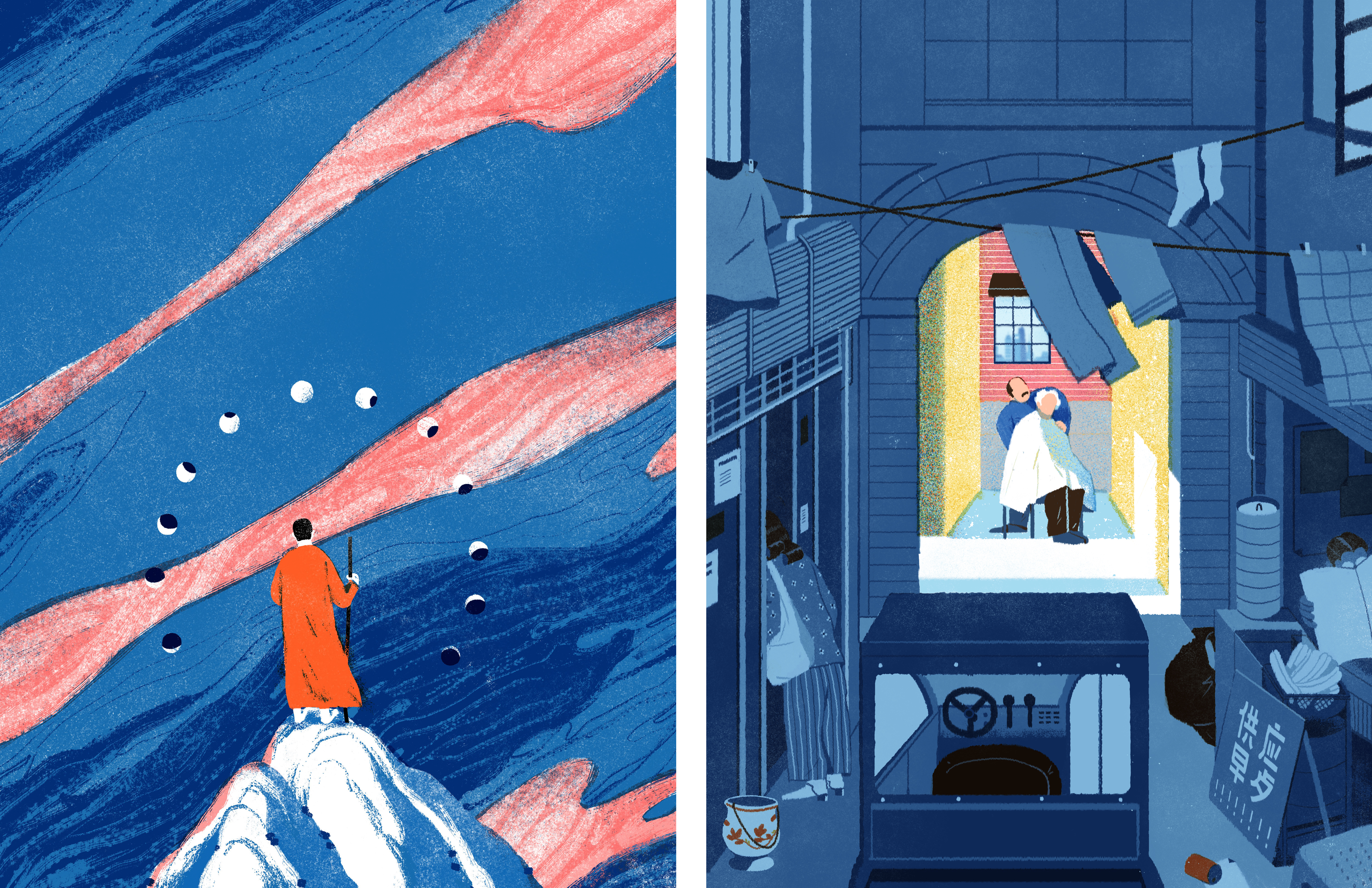 I wanted to express my concern about how we all make selections based on quantified data that is collected from personal preferences. Eventually, we won’t be able to experience new things at all.

Are there any artists you really admire and often look to as a source of inspiration?

There are quite a few – Christoph Niemann, Chris Ware, Josh Cochran and Emiliano Ponzi. But I also follow the works of some contemporary artists and photographers such as Damien Hirst, David Hockeny, Thomas Giddings, and so on.

In what ways does technology, more specifically social media, help you as an artist? Do you see any kind of disadvantage to creating art in the time of social media?

There is no denying that social media is a very important platform for artists to showcase their works and put them on the world map. It’s how you get clients or search for inspiration. But it’s not without its problems, the most obvious one being the growing similarity between works by different artists.

How has your experience been as a freelancer so far? After college, do you plan to continue freelancing or work at a studio?

Becoming a freelance illustrator means I have to be my own agency and accountant, in addition to creating work. Moreover, I will have to pay close attention to my personal finances because there is always the possibility of not getting a project for an extended period of time. It’s definitely not as easy as working for a company or just working for someone else.

To be honest, I’m still not sure about my plans for the future. All I know is that it’s going to be full of challenges. For now, I’m just looking for a reliable agency to represent me, and in the meanwhile, I am making my artworks more creative and unique. It all depends on whether the opportunities I get are right for me or not. So anything is possible.

Art, Artist, China, China Academy of Art, contemporary art, Illustration, Interview, Shanghai, Visual Arts
All the images are artworks by Yulong Lli. ©
Yulong’s photographs are provided by him. ©
The cover image is an illustration by Yulong titled 'Temperature of A City'. ©