Wenyi Geng spent a significant portion of her childhood watching Studio Ghibli movies, a fact we’re made well aware of as soon as we dive into the whimsical worlds that her illustrations bring to life. Wenyi has been on a journey of her own – one that took her from Japan to China to New York, where she studied at New York’s School of Visual Arts and currently works as a freelance illustrator. It’s a journey definitely worth delving into, and that’s exactly what we did.

In this interview, we speak to Wenyi about her creative influences, work rituals, Studio Ghibli, New York, and social media, among other things. Could you tell us about your childhood?

My family is from Beijing but they studied and worked in Japan for 15 years. I was born in Japan and lived there till I was six, and then moved to China where I did my undergraduate studies. My childhood in Japan was really normal and ordinary; I never felt different in any way from other kids. Everyone was really friendly and nice to me – the only Chinese in the kindergarten. I lived in a small town, plush with nature. We played in the park a lot and caught bugs around our neighborhood. I had a great time.

I returned to China to live with my grandparents when I was about six years old. It took me a while to learn Chinese, almost two years. I don’t remember much but from what I do, I had a hard time understanding my teachers and classmates. However, being a kid meant that it wasn’t as tough to learn a new language and once I did, I continued living my usual life. Other kids would try to teach me Japanese when they found out I was born in the country.

I love my family and my grandparents. I’m currently in New York, and the rest of my family is in Beijing. They’ve been very supportive of me and everything I do, which gives me all the strength I need to continue doing just that.

What were some of your early creative influences?

My biggest influence is definitely Studio Ghibli movies. I’ve watched almost every single one, and like a lighthouse in my heart, those movies are what guide me as I pursue my dream. I also watched a few different Chinese animations in the fantasy-adventure genre, which had a lot to do with my love for adventure, journey, and nature.

When and how did you realize you wanted to pursue art?

I was a quiet child and I drew a lot, almost non-stop. This was enough reason for my mother to finally send me to an art high school. She also loved art, so she was especially thrilled about this decision.

Like I said, my family never said “no” when it came to doing what I loved, so there was never an argument about whether I should go ahead with it. As far as my motivations go, it’s never been anything else for me. I could never do something that wasn’t art. 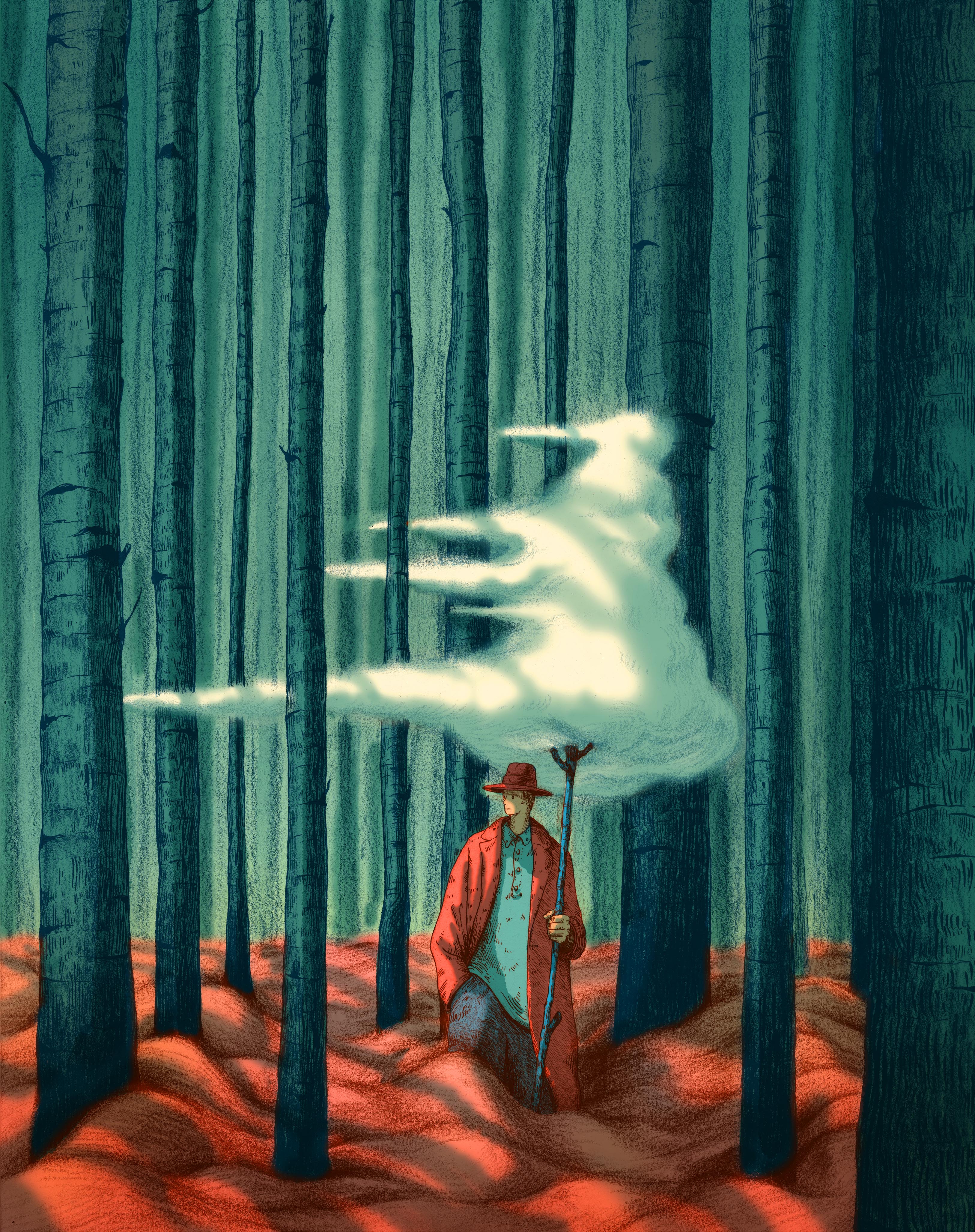 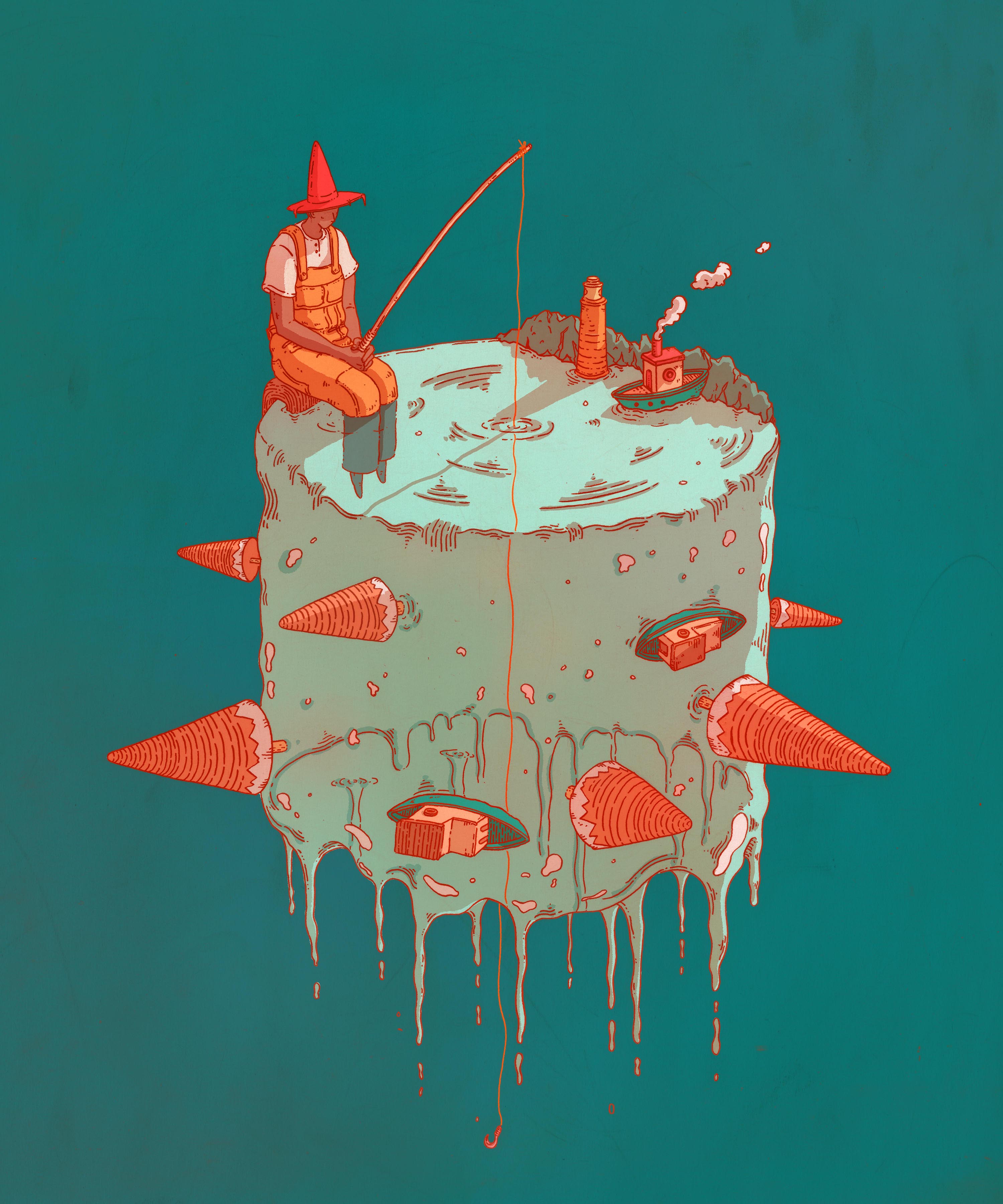 The greatest benefit of social media is its convenience and the opportunity to showcase your work to the world. On the flip side, it slows down your creative process considerably.

How has your experience been in New York so far? What do you like and dislike about living here?

I’ve been in New York for my grad school, and it’s really different from where I was before.

I have to admit that New York is one of the best places for an artist. I can feel it even though I’m still in school. I’ve seen so much talent here and at the same time, have been stressed out by the sheer pace and intensity of this city on multiple occasions. It’s quite tiring.

Your work has a very surreal, almost fantasy-fiction feel to it, and strong influences of Manga. Could you tell us more about it?

I’m not sure how others look at my work, but for me, there’s a world in my mind that I’m eager to show to the audience. When I was a kid, I watched Ghibli movies apart from a ton of other Japanese manga and animation, as I mentioned before. All of them were a huge influence. After that, I started to read novels and watch movies, and I soon realized my love for everything surreal.

Staying and studying in New York taught me to focus on creating what came straight from the heart instead of pushing myself to take up things I’m not too keen on. It was the first time I drew without thinking too much about having to make it look great. 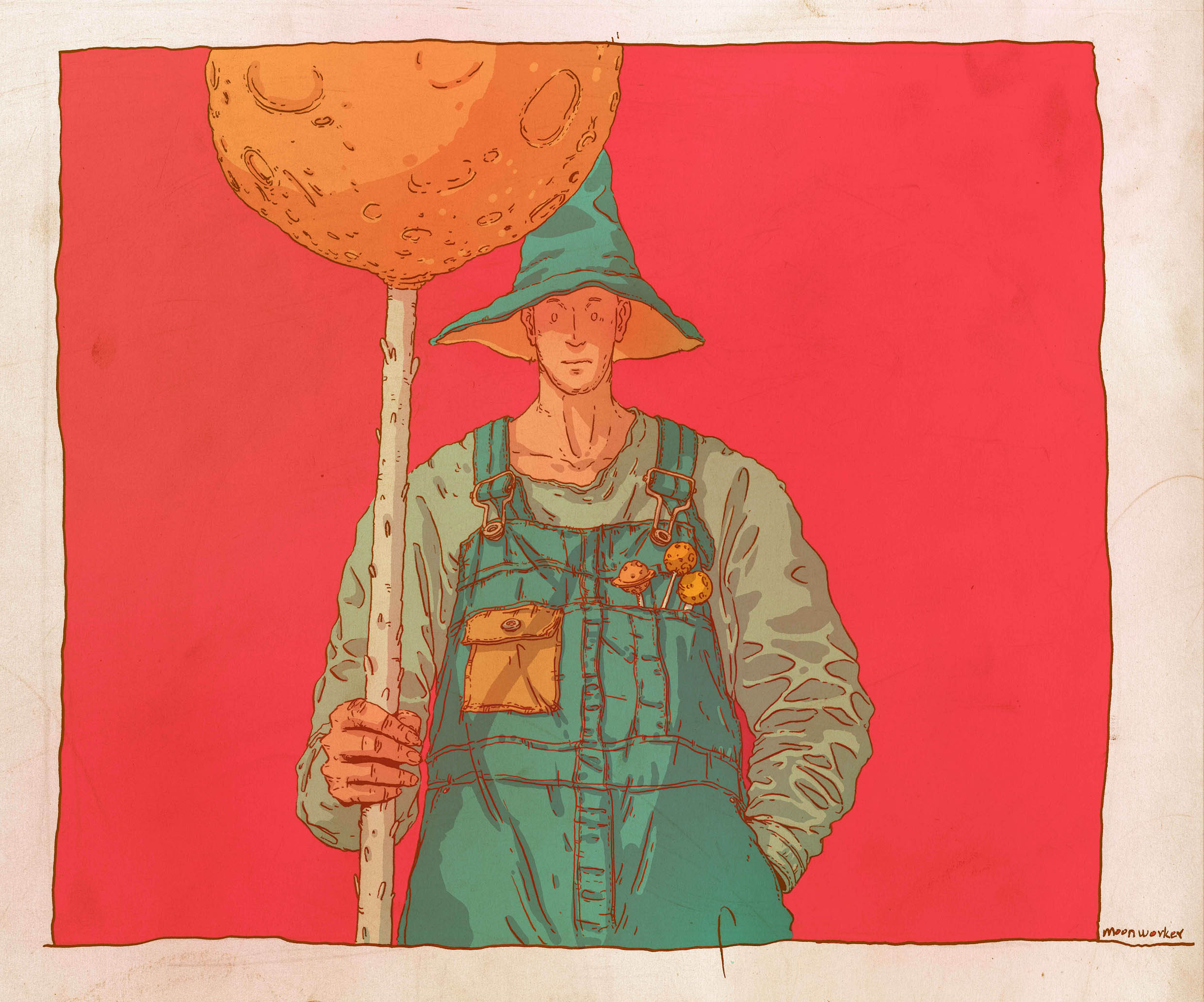 Could you pick one personal project of yours and tell us about what inspired it and its making in detail?

During the second semester of my first year, I made a book for a project was called ‘PAPERBOY‘. It is a story of a tiny person who lost a piece of paper and sets out to find it. The whole idea came from an image I made before that semester began: a pilot holding a floating paper plane. Originally, I had something completely different planned for the book project but then I realized I can easily use this image and develop it into a whole book.

Usually, I come up with a few sketches first to see if there’s a possibility of developing a narrative line, but for ‘PAPERBOY’, it was more or less random. The single image of the pilot just dawned on me and I made it just for fun. Since I never thought of using it, it turned out to be a good starting point for the book. There was no purpose so naturally, there was no pressure.

We are also interested to know more about your ‘How to be a human’ project, inspired by Franz Kafka.

It was a project I did before school had started. We received an email about a Kafka short story – a monkey gets caught by a human and gradually learns to live like one. That’s how I had the idea to do an instruction manual of sorts on ‘how to be a real human’.

I wanted to describe a few different things from the monkey’s point of view. As human beings, we wouldn’t know what it truly meant to be able to look at other humans from a whole new perspective. I decided to use a sarcastic tone throughout the book to amplify that.

It was my very first project in grad school, and helped set certain standards for my art and what I could expect out of it. I had some clarity over my likes and dislikes when it came to drawing. While I was working on the images for the manual, I had problems dealing with the realistic aspects of the environment. It was fairly obvious that I avoided drawing specific elements but I did manage to face a few of my fears in the process. Overall, I couldn’t be more grateful.

I really like Italo Calvino. I fell in love with his work right after I read one of his novels and haven’t stopped since. I especially like novels with an obscure level of realism attached to them – not one hundred percent real, nor unreal. His writing lifts my imaginations without driving me too far from the world I live in, almost as if it could take place here, which makes me trust it all the more.

I’m not very good with multi-tasking, so I prefer to take on one project at a time. Of course, working on multiple projects is inevitable and sometimes I’m confronted with that fact but whenever possible, I try and finish everything one by one. I spend a lot of time on each drawing I produce, making sure everything is perfect.

I’m also always listening to music. As long as I’m drawing, I have my headphones plugged in. It’s not as much about what I listen to in the moment as it is about the comfort I seek from being completely cut off from background noise. Naturally, there’s a downside to it – I ignore everything around me. 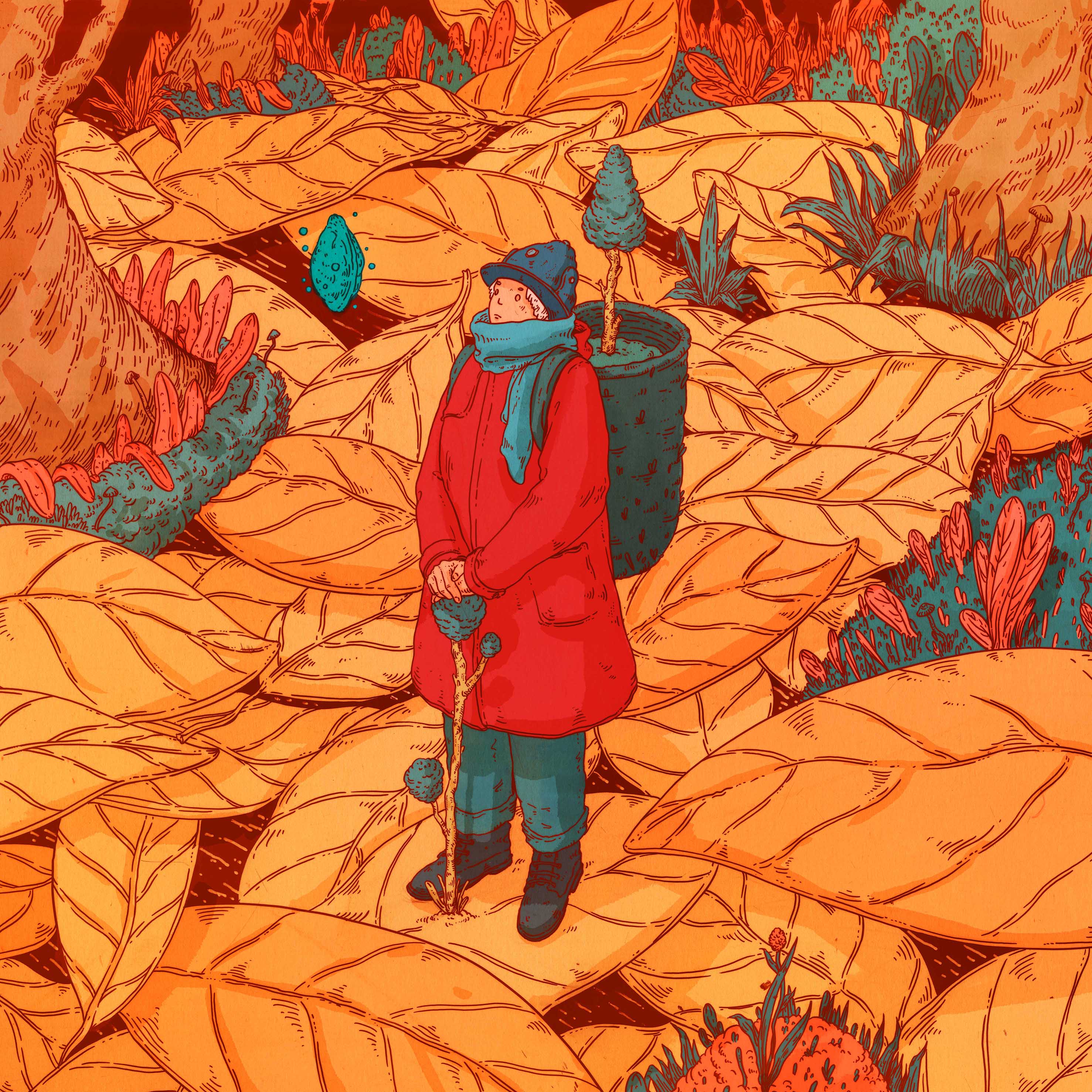 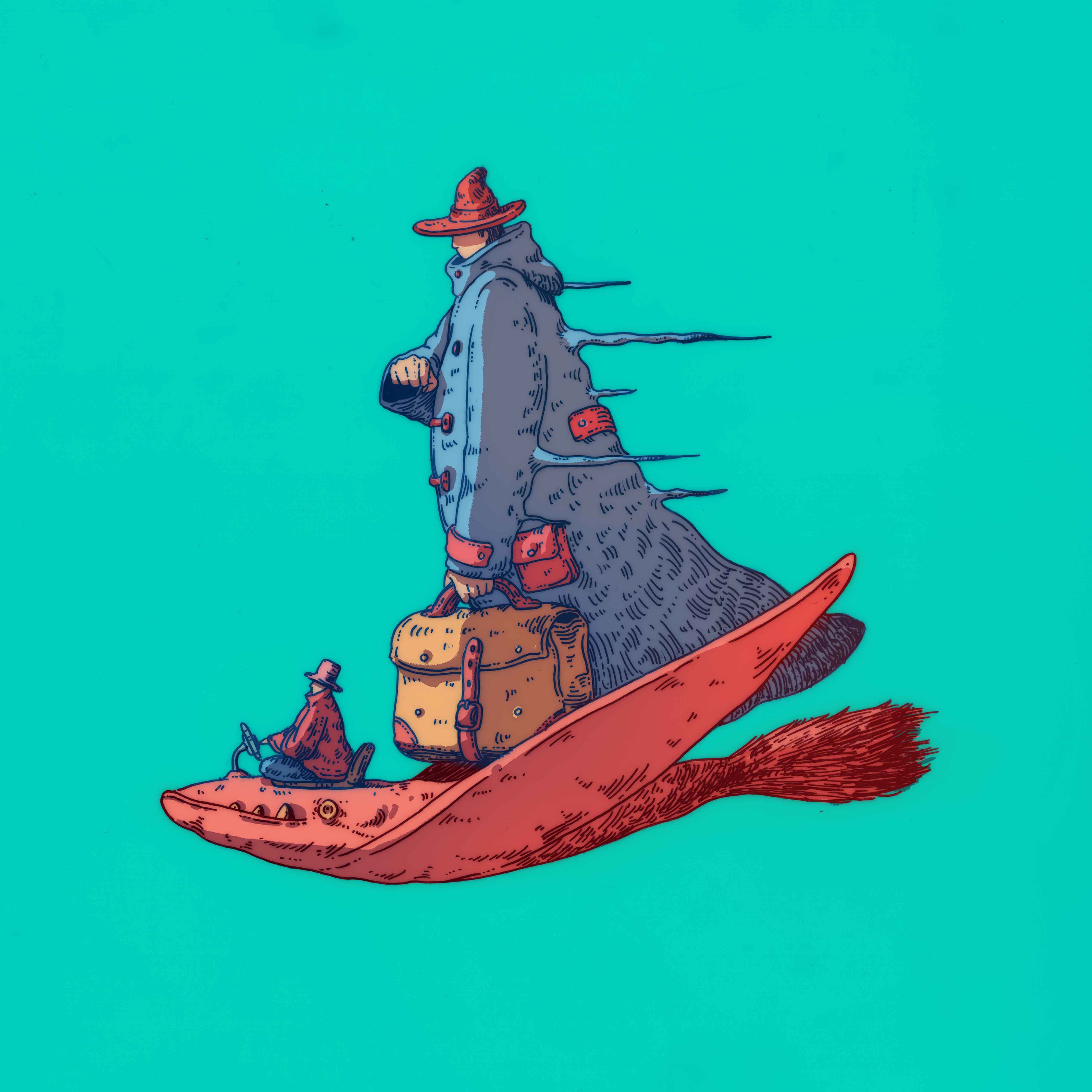 Staying and studying in New York taught me to focus on creating what came straight from the heart instead of pushing myself to take up things I’m not too keen on. It was the first time I drew without thinking too much about having to make it look great.

In what specific ways, does technology (especially social media) help you as an artist?

I largely focus on Instagram and Behance. The greatest benefit of social media is its convenience and the opportunity to showcase your work to the world. On the flip side, it slows down your creative process considerably. It’s a little overwhelming. I used to post every few days, and it made me lose the ability to look at my work and judge my work for myself.

Who are the artists around the world that you really admire?

Moebius, Shaun Tan, and few manga artists from Japan. It’s tough to handpick a few though as there are a lot of artists I really admire, and not just from the world of illustration, but also from music, cinema, literature, and so on. I’m always learning new things from them.

What are some of your biggest inspirations in life?

It’s really hard to shrink it down to just one, but it has to be nature. When I travel, I feel the power of the ocean, the mountain, the woods…everything, down to a tiny flower on the sidewalk. It doesn’t matter how strong or powerful we are, our lives were, are and will be dictated by nature. That to me is real power.

Do you think about your life after art school? Do you see yourself as a particular kind of artist?

I find it very challenging to plan something but the one thing I know is that I’ll keep working, a lot. I might be making a children’s book right now, but I’m not sure what kind of artist I am. I don’t mind people calling me an illustrator or whatever else, but I don’t really have a particular name for myself yet, nor do I want one. I would rather not limit myself, and instead try all kinds of different things and see how far they take me. 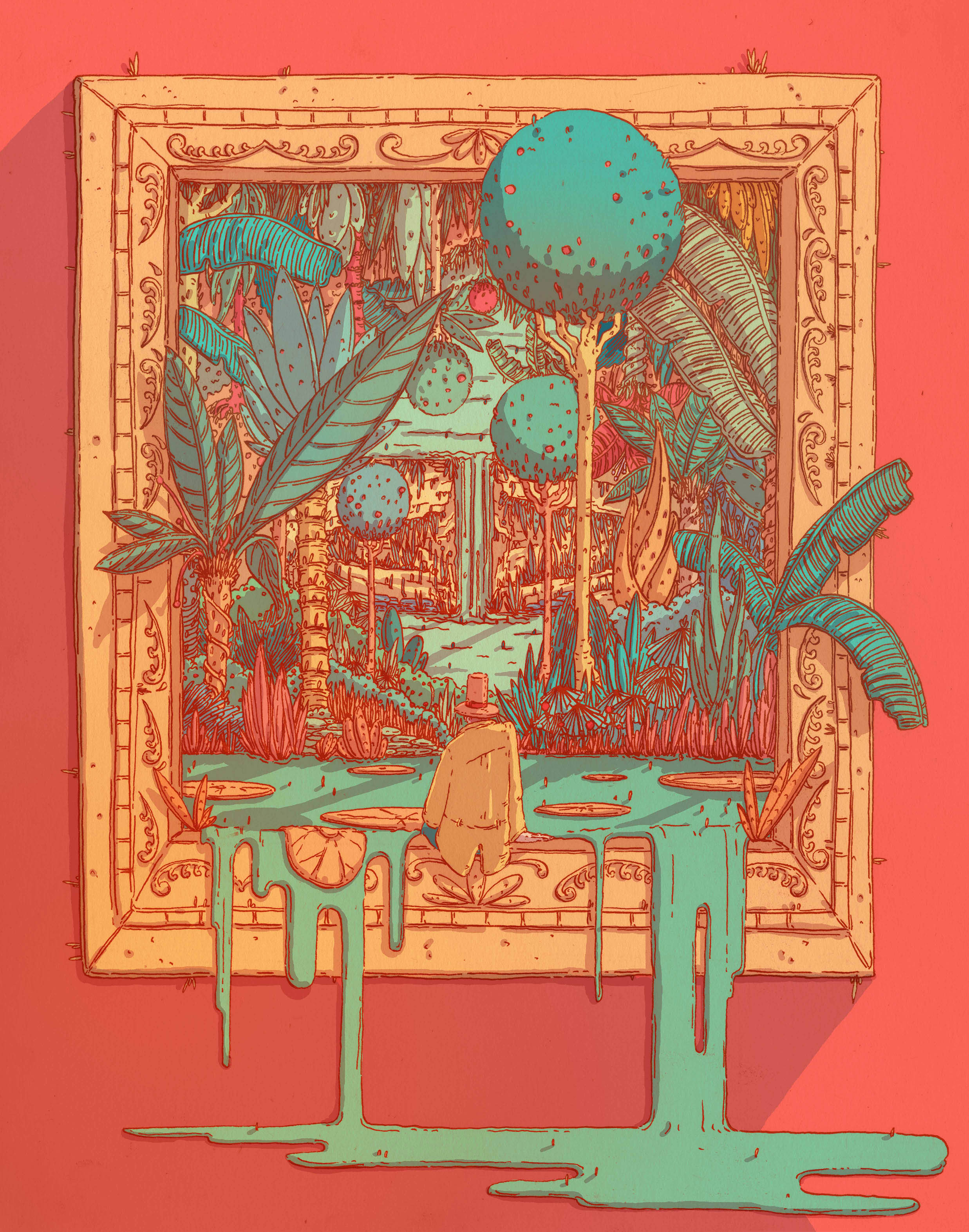 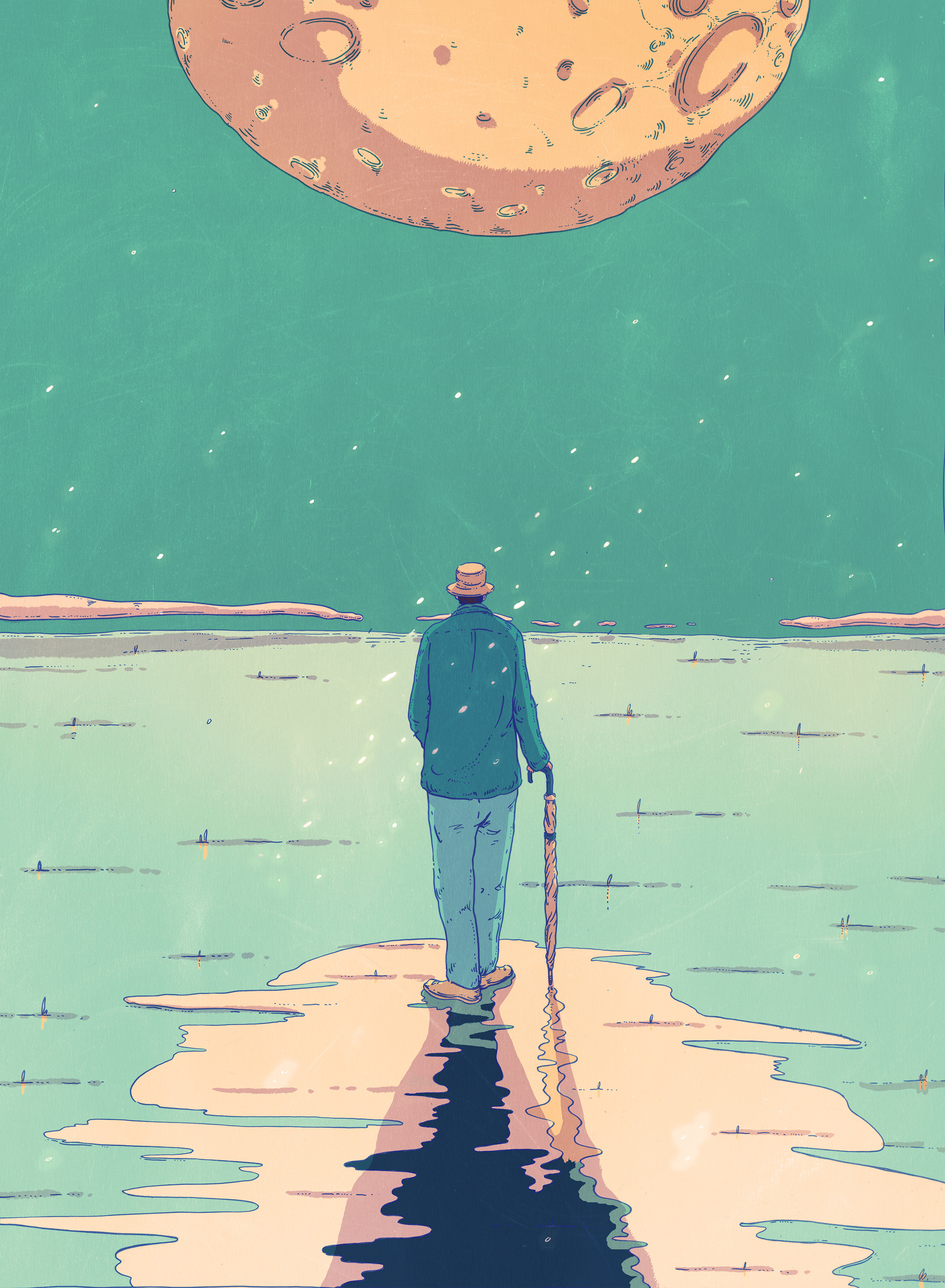 Please note: This interview was conducted in April, 2018.